Zagreb doesn’t really offer a great selection of original street food, snacks on the go, which maybe isn’t so bad because it tells we have always preferred to sit down and eat properly. However, in the area of quick bites, there’s so much choice that sometimes there’s no point in going further from appetizers. Guests are regularly welcomed with a platter of cold cuts, mostly selected charcuterie products and cheeses.

The area surrounding Zagreb is abundant with those delicacies, so let’s mention just a few: Samobor salami, dry cottage cheese, dried beef tongue, boiled ham with horse-radish. One of the symbols of Zagreb cuisine - cottage cheese with cream - epitomizes the simplicity of peasant dishes. Those two ingredients also go in the most iconic dish of the north-west Croatia - štrukli, filo dough filled with a mixture of fresh cottage cheese, cream and eggs.

There are many ways to prepare it and eat it, but boiled štrukli or štrukli in soup make a great warm starter. Hearty dishes eaten with a spoon are very important to Zagrebians, so a heart-warming soup is the essential part of a family lunch. Clear beef or chicken soup with homemade noodles or grated fresh-egg dough is classics. A richer version of the chicken soup is called ajngemahtec, derived from the Austrian cuisine, and made with giblets, root vegetables, peas and the obligatory noklice, fresh-egg dumplings.

It’s a stereotype that Central European cuisine, both in Slavic and Germanic countries, comprises many not too exciting variations on meat dishes with a lot of potatoes, root vegetables, cabbage and bread. Although these ingredients are widely present in traditional Zagreb dishes, especially during autumn and winter season, there is still room for creativity, diversity and local touch.
Meat lovers will have a great time in Zagreb. The most famous specialty and must-have item for holiday meals is roast turkey (preferably from Zagorje) with mlinci, pasta tatters first softened with boiling water, and then finished in the gravy from the roast. Home-grown goose or duck is also a fine option and rewarding partner to mlinci. Zagreb steak is a richer version of the much more popular Vienna steak: breaded veal steak stuffed with ham and cheese. Kotlovina is a special method of preparing meat used in continental Croatia: meat, sausages and vegetables are slowly simmered in a special metal plate on open fire, literally for hours.

Buncek is an all-round meat delicacy: smoked pork shank is usually boiled in its own juice and served with sauerkraut. To mention but a few other stars from the long meat list: pork chops in must, veal knuckle, beef or pork fillet steak, Šestine tenderloin. In winter, kitchens are full of various homemade sausages, traditional češnjovke (garlic sausages) or krvavice (blood sausages) being the most popular choice. Filling soupy dishes based on beans are available all year round, especially with the addition of the afore-mentioned buncek, sausages or dried ribs. The influence of the neighbouring Hungary left us variations on the theme of goulash and paprikash, although milder than the original. Together with špek-fileki (tripe with bacon), they make the standard line-up for traditional gablec (working class mid-morning meal). If a vegetable stew is served for lunch, it is very likely that meat will be on the side, often in the form of the all-favourite faširanci, minced meat patties.

Luckily, Zagreb’s cuisine is far from being focused on carnivores only. In comparison with similar-profile countries north from Croatia, Zagreb surroundings are abundant with home-grown vegetables, accompanying the meals as fresh seasonal salads and tasty side dishes. Vegetables are also widely used in stews, called ćušpajz, for example marrow stew or cucumber stew. The affordable and easy accessible cabbage is frequently prepared, especially in some old traditional dishes like krpice sa zeljem (pasta flakes with cabbage) or prisiljeno zelje (cabbage stew). The no-fuss plainness of peasant foods is also evident in recipes like trganci s vrhnjem (pasta tatters with sour cream) or žganci s lukom i špekom (polenta with onion and bacon). Wild mushrooms have an important role in Zagreb’s cuisine, too. Forests outside the city are full of them during rainy periods, and the delicious and versatile boletus is considered the king of the forest. 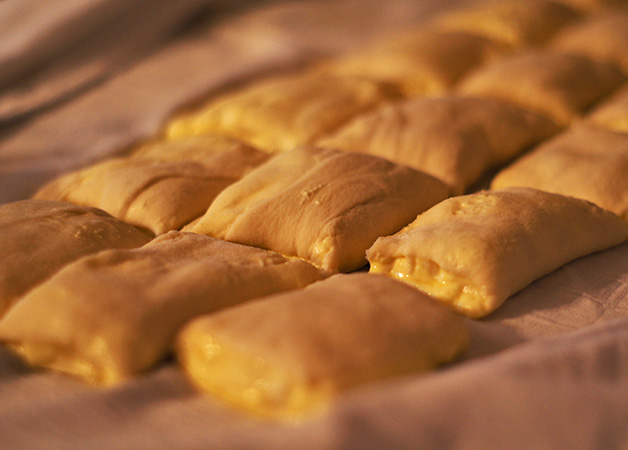 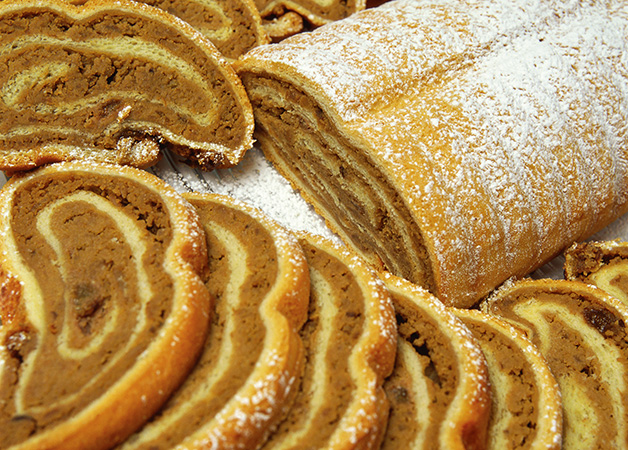 If you have a sweet tooth, you will find it very easy to satisfy your needs in Zagreb. Confectionary has always been highly appreciated and has a long tradition. The trend of Vienna pastry shops and cafés was successfully transplanted to Zagreb, while the Oriental influence is also present in the repertoire of desserts. In Zagreb you can witness a harmonious co-existence of Sacher cake, baklava and the local kremšnita (custard cream cake). Even today several family-owned pastry shops with a long history are still active and thriving, while there’s also more and more modern patisserie shops reviving traditional Croatian sweets or following global trends. Not too original but certainly the most frequent dessert offered are pancakes or strudels, for which almost every household takes pride in their own recipe.

Among the usual strudels made with apples, fresh cheese or sour cherries, a special place is reserved for the local bučnica, filled with the mixture of grated marrow, sugar and cream. The praised štrukli are simply irresistible in their sweet incarnation, gratinated with heavy cream. In fact, most of old local desserts are perfectly minimalist, a true exercise in resourcefulness of our ancestors, who only had a few simple ingredients at hand. Well-known sweets include orehnjača (walnut roll), makovnjača (poppy seed roll), zlevanka, buhtle, tenka gibanica, medenjaci (honey biscuits), jabuke u šlafroku (fried apple slices), knedle punjene šljivama i marelicama (dumplings filled with plums or apricots)… The modest paprenjak, a pepper biscuit celebrated in novels, rose to the status of a well-known symbol and edible souvenir from Zagreb.

Of course, many desserts came to Zagreb’s kitchens from Austrian and German sources, like carski drobljenac (Kaiserschmarrn) or kitnkez, sweet quince cheese. And when Zagreb’s ladies of the house wanted to show they can compete with the lush Austrian cakes, sparked by local pride they invented Jelačić šnite, a rich and creamy cake with walnuts and chocolate. Chestnut is widely used in desserts during autumn and winter in Zagreb, and the main star is the classic chestnut puree with whipped cream. When it’s warm, the ice cream scene is very active. A good ice cream is highly esteemed and the competition is tough. More creative ice cream parlours tend to add some typically local ingredients to their Italian ideal.

Zagrebians are big coffee drinkers, and coffee is more than just a drink, it’s a social phenomenon, taken very seriously. The coffee house culture reached its peak in the 19th century, with grand cafés inspired by Viennese models, which acted as the hubs of social life. The Austrian style of long coffees with milk and Italian finesse ousted the impact of Turkish coffee. The grandeur of Austro-Hungarian cafés is now gone, they have been replaced with smaller and more intimate coffee houses, adapted to suit all needs and tastes. Going for a cup of coffee in Zagreb primarily means an invitation to a long session of hanging out and relaxing, especially when downtown terraces are basking in the sunlight.
In the old days inns and pubs were no less popular than cafés. Although Zagreb has always been part of wine country and wine tradition is no doubt longer and stronger, beer is now the leading drink in terms of popularity and consumption rate. During the Habsburg Monarchy, Zagreb accepted the new trends coming from Bavarian and Czech lands and the first small-scale brewery was opened in the mid 18th century. Over a century later, big brewing companies took over the production.

However, to the joy of beer enthusiasts, Zagreb is currently undergoing a new beer revolution initiated by several newly opened craft breweries, introducing a new approach, standards and flavours to the local scene.
Grapevine came to these parts a long time ago and struck deep roots. Unusual for most European capitals, Zagreb lies in the middle of a flourishing wine country. Apart from being surrounded with small but intriguing wine regions like Zelina, Moslavina, Prigorje, with better-known Zagorje and Međimurje also quite close, in its immediate vicinity Zagreb is blessed with a real gem - Plešivica. The slopes of Plešivica are full of small family-owned wineries, some of them among the top producers on Croatian expanding wine scene. This region is known for high quality white varieties like Riesling, Graševina, Chardonnay, Sauvignon blanc, Pinot blanc and Pinot gris, red Pinot noir also gives excellent results, and lately outstanding sparkling wines have been making a boom. Native young wine called Portugizec is one of the heralds of autumn, paired with roasted chestnuts. Although the prejudice that the purpose of gemišt is covering up bad wine is still very alive, this mixture of cold sparkling mineral water and crisp white wine has been favourite refreshment for generations, especially in summer.

Brandies and liqueurs will be offered to you on many occasions and in large quantities in every corner of Croatia, including Zagreb, and this category definitely has the biggest number of DIY experts. Among flavours typical for this region you will find Williams pear, sour cherry, plum, honey, quince, walnut. In the wide range of strong drinks, native products worth attention are the unique Samobor bermet, aromatized wine with wormwood, spices and Mediterranean fruits, and the ancient gvirc, honey-based mead. The iron-rich blackberry wine, regarded by old folks as medicine rather than just a drink, is quite well-known and often found around Zagreb.
Older generations will surely name homemade juices made from elderflower and raspberry syrup as one of unmistakeable triggers for childhood memories. Thanks to the trend of tradition revival and proactive small farmers and producers, these drinks are making a comeback and can be found in many of the city’s bars and cafés, as Zagreb’s antidote to global soft drinks.