The sleepy village of Ščitarjevo sits on top of the former Roman town of Andautonia, a first-century settlement that prospered from its position on the Sava valley trade routes. The site of the archeological excavations is now an attractive public

park, where visitors can stroll along smoothly paved Roman streets, or examine the under-floor heating system of the former municipal bathhouse. Every year in late April the Days Of Andautonia celebrates the region’s Roman heritage with experimental

A wealth of traditional wooden architecture can be found in the Vukomeričke gorice hills just southwest of Velika Gorica. Characterized by ridge-top villages, beech forests and vineyards, the hills provide the perfect rural antidote to big-town bustle. Twenty-five kilometres out from Velika Gorica is the village of Lučelnica, where the Holy Trinity Chapel (kapela Presvetog Trojstva), dating from 1935, boasts a charming shingled clock tower and an interior paved with huge oak cubes. Further over to the

west is Gustelnica, where the Chapel of St Anthony (kapela Sv. Antuna) is one of the most attractive of the region’s churches, its late nineteenth-century porch held up by forked wooden pillars that look like enormous rakes. South of here at Lukinić Brdo, the early twentieth-century Church of St John the Baptist (Crkva svetog Ivana Krstitelja) is a tribute to the craftsmanship of local woodworkers, its porch beams carved into swirling arabesques. Most rustic-looking of the region’s

timber masterpieces is the hilltop Chapel of St George (kapela Sv. Jurja) in the village of Lijevi Štefanki, its rippling shingle-covered roof topped off by a big cast-iron cockerel. Built in 1677, it was moved on rollers to its current location a quarter of a century later. The chapel is so small that its rear walls were fitted with large removable flaps, opened on Sundays so that services could be followed by those left outside.

One of Croatia’s best-known examples of traditional timber architecture is the Church of St Barbara in the village of Velika Mlaka, a few kilometres south of Zagreb. Constructed from huge oak beams in the late 17th century, the church interior was beautifully decorated by local painters in

the 19th century. Almost every inch of the interior is covered with panels illustrating scenes from the life of St Barbara, portraits of saints, and ebullient floral motifs. 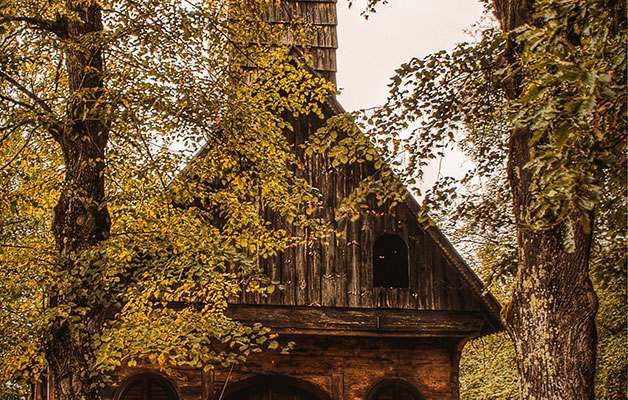 The town of Sisak has a historical pedigree second to none, having served the Romans as the river port of Siscia and subsequently playing a crucial role in the defence of Central Europe against the Ottoman Turks. There is an absorbing display of antiquities in the town

museum, and exposed fragments of Roman-period wall in front of the parish church. Historical exhibitions are also held in the imposing triple-towered fortress that dominates the confluence of the Sava and Kupa rivers. It was under the walls of the castle that a combined

Made up of meadows, marshes and oxbow lakes stretching along the eastern bank of the River Sava, Lonjsko polje is Croatia’s largest area of protected wetland. It is also a treasure trove of traditional wooden architecture, its villages filled with picturesque timber houses – many of them covered in vines or decorated with hanging baskets. Settlements on either side of the Sava are connected by archaic chain-operated ferries known as skele, which shuttle from one bank to the other as soon as a few cars arrive. The Lonjsko polje is prone

to seasonal flooding, when the Sava bursts its banks and turns local pastures into swamps. As a result the region is home to a rich diversity of wildlife, including over 250 bird species. The area is perfect for cycling, and there are plenty of bikefriendly bed and breakfasts - many of which occupy traditional timber houses - along the way. The Lonjsko Polje Nature Park has information centres in both Čigoč, a village famous for its population of migrating storks, and Krapje, which boasts the best stock of well-preserved

timber houses. Both of these villages serve as trail heads for nature walks, which take visitors along the dykes and through the forests of the Lonjsko polje’s unique landscape. Also accessible from Krapje is the Krapje Đol ornithological reserve, one of Europe’s most important nesting grounds for spoonbills.

One of Croatia’s most important World War II memorial sites lies just south of the Lonjsko polje, near the quiet riverside town of Jasenovac. It was here that an estimated 70,000 Serbs, Gypsies, Jews and Croatian antifascists were murdered in

the labour camp established by the pro-Nazi Ustaša regime between 1941 and 1945. An imaginative multimedia display tells the story of the camp through a mixture of photographs, old newsreels, and filmed interviews with survivors. Towering over the

meadows where the camp buildings once stood is a graceful modern memorial known as the Stone Flower, providing a focus for reflection and remembrance.